Posted by Kirby & Christen on Monday, 26 November 2018 in Cognitive Development 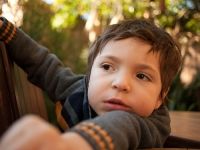 Does your gene pool have learning challenges in the mix: ADD/ADHD/autism/dyslexia? Studies of children diagnosed with autism show that early intervention has helped to the point that the autism was undetectable. There are also early intervention techniques for physical challenges. Almost any problem that presents itself in childhood can be helped if we work with the child in fun and helpful ways. Involving as many senses as possible in the learning process including physical activities is a key factor. If the body can move while learning, by the time a child is school-age the brain will have made all kinds of new connections.

Maria Montessori, the first female doctor in 19th century Italy, saw children labelled "mentally retarded" and believed they could learn. She broke everything down into small components and taught using the body through doing activities that laid the groundwork for math, language, and all other learning. After Montessori worked with them, the same children with these labels on their identity were then able to pass the exams taken by "normal" children.

Let's look at some ways to employ this technique to break math down into small parts. For a child to learn math it has to be pieced apart:

Part 1: counting - learn to count in the right order.

Part 3: learn quantity. (Kirby used to run a Montessori preschool but this is her personal method based on that experience.) A game for learning how much makes 1 and 2: take four envelopes, write the number one on two of them and the number two on two of them.  The adult gets a #1 and #2 envelope as does the child. Together, parent and child hop on their own #1 envelope, then jump with two feet on their #2 envelope.

Another reinforcement of this would be to put raisins or small pieces of apple on the envelopes: one raisin on the #1 envelope and two raisins on the #2 envelope. Clapping could also be used to physically learn counting - one clap for the number one and two claps for the number two. After using the body, the taste buds, and the physical actions, most children will have number knowledge, recognition and the concept of these numbers quantity (how much it is).

At this point, number three can be introduced. Jump, hop, clap, and have fun! Make it funny. Ask at meals, "Would you like three green beans or four peas?" Use food that you would eat anyway to further their knowledge with using senses and taste buds. This solidifies the knowledge. When working up to six, homemade dice can be used to determine the number of jumps, claps, or whatever you choose to reinforce the learning. When walking on stairs, help the child know to count when you put your foot on the stair (this also helps with one-to-one correspondence).

Whatever the child is doing to learn these concepts, parents do these things with your children.

After children know how to count from one to ten, know the symbols for the numbers, and know how much each quantifies, then start with simple addition. Two cubes (homemade dice) can be used to give numbers for math sentences: add, subtract, multiply, and divide eventually. Remember, just because they can count doesn't necessarily mean that they understand quantity. Take each part as it comes and make sure the concept is fully understood before moving on. Baby steps!

Kirby's Notes on "The Developing Person Through the Lifespan," by Kathleen Berger
How to Stretch Your Child Out of Their Activity Comfort-Zone
Three Rules for Development
A Plethora of Pouring Games
Matching Games Galore
Parents' Emergency Box
Building Character Game
Littles Learning On The Go