If They Repeat It, They'll Likely Complete It

Posted by Kirby & Christen on Tuesday, 11 October 2016 in Parenting

When Kirby Worthington, co-founder of Growth and Giggles, was working toward her Master’s degree, she spent time as a director of a Montessori preschool. She had read research on repetition and decided to test it out. On a very cold winter’s day, after three days of freezing rain and no outside playtime at school, the sun came out and it was time to go outside again. However, under the swing there was a giant mud puddle full of the freezing rain. Before going outside she gathered the children and told them: “We’re going to get to play outside, and you can play on any of the equipment – except no swinging today”, and she explained about the puddle. As they went out the door, she stopped each child asking them, “Where are you NOT playing today?” And they would repeat back to her, “No swinging and no playing in the mud.” Do you know, the experiment worked and not one child broke the rule. She was outside observing their behavior and, sure enough, they had in their minds what to do and what not to do. And they stuck to it.

If they repeat it, they’ll likely complete it.

Preschoolers cannot “encode” easily – that is, it is difficult for their brains to take diverse experiences and make them into understandable memories. They simply cannot remember things after only one time. Remember the last post when Kirby’s kids would repeat what was expected of them at the grocery store? They would repeat these every time on the way to the store.

Children need reminders as well as consequences. For example, suppose one of Kirby’s kids did touch something in the store after repeating the rule to not touch anything. (Yes, it did happen.) She would remind them of the rule; she would show them that their choice did not adhere to the rule; and she would explain that this meant that they would be spending time in the cart that trip. She would say, “I’m so sorry you forgot that rule. I hope this will help you remember for next time.”

It is not only repetition that matters, though. Tone matters too. It’s our job to train our children in a way that they feel loved and valued, so a big part of repeating rules or expectations to these wee ones is the way we say it, our tone of voice. People respond well when they are treated with respect, when they are treated as the wonderful, responsible people we hope they are. And tone plays a big part in showing them value. We can choose to use tone and words that value our children because part of loving them is choosing to value them.

If they repeat it, they’ll likely complete it.

This is not magic. This is just a tool. When used as a tool, there should be far fewer times those in our care will break away from our expectations communicated clearly to them. Of course, there will be exceptions to the rule. There will be children who have impulse-control issues to some degree, as all preschoolers experience. Those of us who deal with more of this will need more patience with these dear ones. Hopefully, as time moves on the time gap between when the thought comes into the child’s mind and their choice to act on it will lengthen and they will be more able to control those impulses.

But for now let’s get this stuck in our heads: 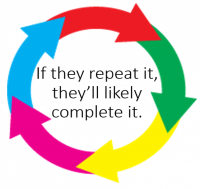