When Can Your Child Start Pretending?

Posted by Kirby & Christen on Saturday, 05 November 2016 in Cognitive Development 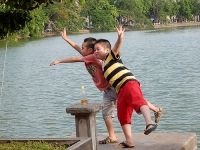 Out of Sight, Out of Mind – from birth to 6 months

Out of sight, out of mind. That’s what the brain of a baby from birth to six months will be processing when the baby sees something. At around seven months old, the brain and how it develops changes to be able to hold on to an image. So if you hide something from your child, they may briefly look for it. But then they’re on to something else that they can see.

These developmental stages are important to know about when we think about pretending with our kids. To be able to pretend one needs to be able to hold on to a picture or action in the mind.

Object Permanence – from 8 to 12 months

Around about eight months of age a child is beginning to know that things still exist even when they cannot see the items. This is known as object permanence. This may be the age that you also see separation anxiety (that is, the child becoming anxious when you leave the room) or perhaps a more tenacious spirit when they’re going after something they aren’t allowed to touch, like an electrical plug. Why? Whereas before you could easily distract them with something else (because the person or item doesn’t seem to exist anymore once it’s out of their attention), they are now gaining the ability to remember that the really interesting person or electrical item does still exist, and it is worthy of more of their interest and inspection.

From eight to twelve months children get better at remembering, so they will look longer for a person or item that is no longer there. By a year old, most children will keep looking for an object after you’ve hidden it. Let the “Hide and Go Seek” games begin! This is also when they start being able to hold in their mind something that they can use to pretend with – an object or action that they have seen but is no longer there.

Little Scientists – from 12 to 18 months

Child psychologists refer to children at ages twelve to eighteen months as “the little scientists”. At this stage they are actively experimenting with everything in the world around them. What will happen if I throw this block down on kitty’s tail? ...I know this hammer works with the toy nail, but what else will it do when I bang it… on the tv? …on the lamp? …on my head?

Also, pretending starts in earnest at around eighteen months. Have fun!

Deferred Imitation – from 18 months to 2 years

Between eighteen months and two years of age, children get better and better at using their imagination. They are actually creating a mental image of something that they can call up or remember. This is also known as deferred imitation. That is, they are “imitating” in their minds or actions something that they have seen, but at a later (or “deferred”) time.

For example, you’ve gone to the park and they’ve experienced the swings. The next day, you may see them swinging a doll using their arms as a swing. Or, in another example, suppose your child has never seen a tantrum before and then sees one firsthand for the first time. Well, you may see them trying it out the next day. This may happen even if they’re not upset! They’re just trying it on for size and seeing what you will do when it happens. Then, parent, you get to show them how you will respond to this behavior. (We’ve calmly explained to our children that when they are behaving that way we cannot understand them and will wait until they can speak to us normally.)

As the imagination develops, there are ways to reinforce the images being captured. For example, books and pictures repeat what happens in daily life and give the opportunity to discuss what the child remembers from events throughout their day. Questions such as “What did we just do?” can be helpful. Or, if you are not the person with whom your child spends their day, take time over dinner to discuss the happenings of the day. There are many ways to help children learn to develop the mental images growing in their minds and to put words to the images.

The pre-school years are a very fruitful time for expanding the imagination, and this goes hand-in-hand with language development. A child who is speaking will be able to describe more, of course. Use other tools to jog their memory. Perhaps puppets that act out stories that include things that have happened to the child. Dress up and act out something together. You can support such creative opportunities with art supplies and dress-up clothing that are easily accessible. Reading stories over and over is a great way to reinforce the imagination and the words that go with certain mental images; then these will be on tap for the next imaginary play of acting out an experience.

The next stage of development will be even more elaborate. They will be able to play games like progressive storytelling where each person tells a stage of a story. For beginners, an adult can prompt the child by saying, “Oh wow, I wonder what happens next?” Or ask questions to queue the imagination. In the case of one member of the group being more detailed than others, an adult can function as the timekeeper limiting each individual to one to two minutes per turn.

Movies are wonderful. However, when it comes to being a useful source for developing the imagination, they are found wanting. Different pediatricians hold to different views, but most agree that television within the first two years is a detriment to children’s brains. The flat screen with three dimensional objects appearing on it turns out to be confusing for the young mind, not to mention the semi-comatose state it puts them in. This can also be said for phones. Instead of handing your child a phone to entertain them, give them a three dimensional object that will help develop the imagination. We learn best through living the experience.

Of course, learning by living the experience cannot happen with everything we want our children to learn about. (It may be detrimental to learn about exploding volcanoes by walking through a freshly covered lava field! Watch a film about it.) Indeed, watching television periodically can be helpful, particularly when there is a discussion following the watching. Talk about what they saw. Act out what they saw. But in general remember this: screen time is simply not the best thing for early cognitive development.

Trackback URL for this blog entry.

Helping Children with Fear
Word Families with Blocks
Teaching Numbers with Blocks
Lying
Kirby's Notes on "The Developing Person Through the Lifespan," by Kathleen Berger
How to Stretch Your Child Out of Their Activity Comfort-Zone
Three Rules for Development
A Plethora of Pouring Games