The Toys Are Being Mean!

Posted by Kirby & Christen on Wednesday, 16 April 2014 in Discipline 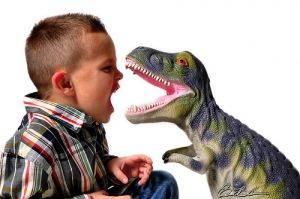 “My son (2.5) is finally into imaginative play. However, the characters aren't always nice to each other. They say things like "you're not my friend". Sometimes they are really bad and get put into the corner. Do I intervene when the characters are being mean and saying things I wouldn't let my son say?”

Sometimes our sweet babies come out with words and behaviors that we haven’t taught them. It can be upsetting, and we wonder, “Do I need to nip this in the bud? Or should play be correction-free territory?”

Preschoolers like to “try on” words and actions that they have observed—whether from siblings, preschool, the playground, or tv. Imaginative play can be a safe place to do this experimentation. It doesn’t mean they’ve internalized the behaviors, or that they’ll start talking like that all the time.

So, the first thing to do is to keep watching over the course of a few days without intervening. (Don’t wait if your child seems particularly agitated or upset by what he is playing, or if he is being destructive.) See if what you were concerned about was a one-time thing, or if it’s being repeated. If it just happened once, no need to worry about it.

If you find that troubling behaviors are being repeated in play, ask if you can join in playing. This creates a safe, non-threatening environment. From here, you can take a few different tacks.

While playing, if your child’s doll says something mean to your doll, have your doll cry and say, “That hurt my feelings.” Then ask your child, “What can your dolly do to help my dolly feel better?” He probably will say he’s sorry, or pat the dolly’s back, but if he can’t come up with something you could suggest, “I wonder if it would help if your dolly said sorry.”

If your child seems angry in his play, you can gently ask, “Your voice sounds angry. Is anything wrong?” If they say that something upset them, try to name their feelings for them. Then suggest something that might make them feel better, like listening to happy music, dancing, taking a walk, or playing a game together.

If your child is using words that are unkind or inappropriate, you can say, “Huh, I haven’t heard you say that before. Did you hear someone say it?” Keep it very light and non-threatening. If someone said it to him, you can ask how he felt when the other person said that. Preschoolers aren’t capable of understanding how someone else feels, but you can still explain, “We don’t say that because it makes people feel bad.” Keep a tone of teaching rather than of correction.

For most troublesome behaviors, there’s an alternative you can offer. For example, if your child is saying, “You’re not my friend anymore!” you can suggest that what he means is “I’m angry,” or “I don’t like what you’re doing.” Teach him to state those feelings straight out, rather than threatening to end the friendship. Teaching is always more powerful when you tell a child what to do rather than what not to do.

Playing with your child can give you a chance to role play—both to model different responses to things your child is encountering, and to let him try out those responses. It also gives you great opportunities to connect, and to ask him about things that come up in play.

Play offers a lot of insight into your child’s world. Bravo to you for paying attention!

Enjoy Your Children!
The Importance of Quiet
Helping Children with Fear
Word Families with Blocks
Teaching Numbers with Blocks
Lying
Kirby's Notes on "The Developing Person Through the Lifespan," by Kathleen Berger
How to Stretch Your Child Out of Their Activity Comfort-Zone