Posted by Kirby & Christen on Tuesday, 21 May 2013 in Uncategorized 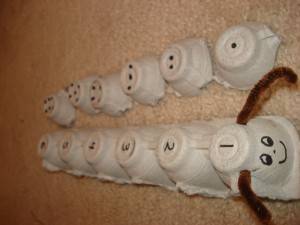 A counting worm is an engaging game for teaching numbers to preschoolers. Make your counting worm out of an egg carton. Cut one strip of 6 cups. This will be your worm. Draw a face on one end, and add pipe-cleaner antenna if you want. Write the numbers 1 through 6 on each of the bumps on his back. Be sure to write neatly and clearly since your kids are just beginning to learn their numbers. Cut a second strip of 6 cups apart into individual cups. This will be your worm’s “clothes.” On the back of each of these cups, draw dots, 1 through 6. Draw them in the same pattern that dots are drawn on dice. The numbers are easier to recognize in that pattern.

Start your game with a story. Say, “This is the counting worm. He’s getting ready to go to school, but he needs your help getting dressed. These are his clothes (point to the cups with the dots on them). This has one dot, so it goes on the number one. Which one goes on the number two?” 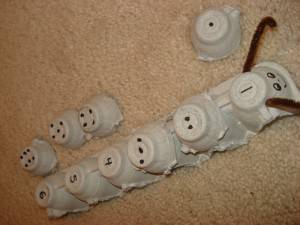 After you have gotten the worm all “dressed,” have the worm move to go to school. Then tip him over so that his clothes fall off, and say, “Oh no! It’s windy, and his clothes blew off! Can you help him put his clothes back on?” Your child will probably only have patience for this to happen once.

This is a good follow-up game after you have been doing lots of counting with your child so that he understands counting and one-to-one correspondence. Count stairs when you go up and down. Count green beans or carrots at meals. Count bean bags that you throw.

You can introduce the written numbers by making soft pretzels in the shape of the numbers or making them with play dough. You can also make sandpaper numbers. Use an index card, write the number in glue, and then shake sand onto the glue. When it’s dry, you can take your child’s index finger and help him trace the number in the same way that he would write it. This engages the child kinesthetically to help him learn the numbers.

When a child can count and has been introduced to the written numbers, it’s a great time to play the counting worm game. Have fun!!