Teach Your Child to Use Scissors

Posted by Kirby & Christen on Tuesday, 05 August 2014 in Physical Development 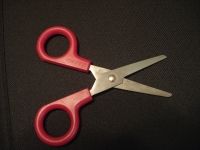 Bouncing spirals hanging from the ceiling fan. Paper dolls. Hula skirts for toys. Fringed placemats. Paper-plate angels. Toilet-paper-tube puppets. When you know how to use scissors, you can make the best crafts!

So how do you teach the skills necessary for all those fun crafts?

Show your child a pair of safe scissors. Tell him it’s like a little bird. The finger holes are the wings, and the blades are the mouth. You can make the bird flap its wings, and then it can open and close its mouth.

Have the child put his thumb in the top hole and fingers on the bottom. A lot of kids try to put their thumbs on top. While they might be able to maneuver this initially, it won’t work at all when they try to cut around curves or cut more complicated shapes. So be sure they have a proper grip from the get-go.

Once your child is holding the scissors properly, have him open and close the scissors. Be the bird’s voice, and have the bird say funny things when your child opens its “mouth.” Let your child talk for the bird too. Hold one pair of scissors yourself, and let your child have one, and make your two birds have a conversation.

Construction paper is the easiest paper to start with, because it is stiff and doesn’t wobble and bend.

A child needs to learn to cut a series of snips before he moves on to cutting down a line (which requires cutting and then sliding the scissors forward and cutting again.) You can start by making a fringed placemat. Your child will be more motivated to practice cutting if he is making a product that he can use. You might want to make one first to show him what it will look like when he’s finished.

Take a piece of construction paper, and hold it taut. Let your child make snips all along one edge of the paper. Then turn and have him fringe the other sides. The snips don’t have to be the same length or evenly spaced. Be encouraging and positive. Make sure you let him use the placemat for his next meal!

Once snips are easy, your child can begin to cut lines. Show him how to make a cut, then slide the scissors forward and cut again. Hold the paper for him, and you can rip a little as he cuts to help him make faster progress.

The next step is to draw fat lines on a paper with a magic marker. Draw a line leaving an inch or so before the end of the paper, and make a crossbar to show him where to stop cutting. Have him try to cut on the line and stop at the right place. Put three or four lines on the paper and have him cut. Blow on the paper and show how it wiggles. The paper can become a hula skirt for a doll, or you can tape it around his wrist or ankle.

When your child can cut on thick lines, try thinner lines to follow.

Draw three S-shaped curves on a piece of paper and have him try to follow the lines. When he can cut curves well, try zigzags, starting with big zigzags with only 2 or 3 corners.

Try a spiral made with square shapes instead of curves, so that your child has to navigate corners. Kids may want to play with cutting different types of spirals for a long time.

When he is really good at all those shapes, try making a long, complicated squiggle all over a piece of paper. The line can’t cross itself, and it has to be a continuous line. Try not to have lines too close together, because they will rip easily. Have your child cut it, and then pick it up and see what shapes it makes. Marvel together at how long it becomes and the fascinating designs he created. After that, your child can make his own line and cut it.

Your child should be an accomplished cutter by now. Let him cut pictures out of magazines. You can glue these on cardboard to make paper dolls and accessories (sports equipment, kitchenware, clothes, household items). Cutouts can also become a fun collage. Give him a theme for the collage, or just let him cut and glue. Cutting shapes out of cereal boxes can become seriation games (put the cereal bowls in order of size, etc.). Paper plate angels are a fun and easy craft.

Once your child is a skilled cutter, the sky’s the limit for fun crafts!